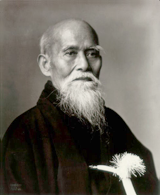 "I am never defeated however fast the enemy may attack. It is not because my technique is faster than that of the enemy. It is not a question of speed. The fight is finished before it is begun".

Stefan, senior instructor at the AIKIDO CLUB HAMPSTEAD since 1993, began Aikido in the mid '70s.

Aikido is a martial art, a brilliant system of self-defence movements, designed to deal with simultaneous attacks by groups of assailants. Both mind and body are trained, promoting fitness, balance and harmony with events.